Waiting for the End of Time: review

“Waiting for the End of Time,” CONCERT:NOVA’s December 19 program at Christ Church Cathedral in Cincinnati, was an exquisite event. Rarely have so many things come together to form a satisfying whole, in this case music, drama and visual art presented in an environment singularly appropriate to it.

In addition, it marked, to my knowledge, the only observation of the centennial of French composer Olivier Messiaen to take place in Cincinnati this year.

Born 100 years ago December 10, Messiaen wrote his famous “Quartet for the End of Time” while interned in a German prisoner of war camp during World War II. It was premiered at Stalag VIII-A in Görlitz, Germany (now Poland) for an audience of fellow prisoners and guards in January, 1941. Informed by the composer’s deep religious faith, it takes the side of hope in a dismal, hope-less world.

The powerful visual element was created by photographer/visual artist Trinidad Mac-Auliffe who compiled images of Bloodgood as each of the four main characters in the play to be projected simultaneously with the music. The black-and-white photos (taken during a 12-hour photo shoot, said Bloodgood) presented the actress in various combinations of clothing, facial hair and headgear.

Written in 1948-49 (originally in French), “Waiting for Godot” is a two-act play about two friends (Vladimir and Estragon) waiting beside a tree for someone named Godot. They do not actually know Godot, but they have been told to meet him and somehow feel that it is important. They wait for two acts, during which a pair named Pozzo and Lucky (master and slave) drop by. At the end of both acts, a mysterious Boy tells them Godot has been delayed but will come the next day. They pass the time aimlessly with chat and mundane matters, even contemplating suicide as a release from boredom.

By contrast, Messiaen’s Quartet was suggested by passages from chapter 10 of the Book of Revelation where an angel proclaims “that there should be time no longer” and that “the mystery of God should be finished.” The eight movements are correlated to the biblical text. Four are for the full quartet, one for solo clarinet, one each for cello and piano and violin and piano, one for a trio of violin, cello and clarinet. The whole lasts about 48 minutes. Bloodgood and members of C:N dressed in tones of cream and white. The spacious interior of the church, with its warm-wood fittings, stained glass windows, massive cross hanging over the nave, seasonal evergreens and poinsettias, was a thoroughly fitting and gracious venue for the concert.

The opening “Liturgy of Crystal” contrasted the pre-dawn awakening of birds (clarinet and violin against a shimmering background) with images of Estragon trying to remove his boots (“Together again,” comments Vladimir). Vladimir peered into his hat (his thoughts) and Estragon fell asleep during “Vocalise for the Angel who announces the End of Time,” where the quartet gave powerful imagery to the biblical vision of the seventh angel who “set his right foot upon the sea and his left foot on the earth.”

Clarinetist Ixi Chen created incredible sonorities in “Abyss of the Birds,” a moving, eight-minute meditation on (according to Messiaen’s notes for the work) “the sadness” and “weariness” of Time. A feat for the clarinetist, it calls for extremes of pitch and dynamics. Meanwhile on the video screen, Pozzo and Lucky appeared, Pozzo ate chicken and philosophized with Vladimir.

Cellist Nelson soared in “Praise to the Eternity of Jesus,” one of two movements exalting the attributes of Christ. Meanwhile, Bloodgood gave voice to a trivial spat between the waiting pair, who make up and conclude “What do we do now that we are happy? Wait for Godot.” The tree (a symbol of the Cross?) has sprouted leaves in act II of the play, from which Bloodgood interpolated further abstracts to “Dance of Fury, for the Seven Trumpets,” a rhythmically complex and strenuous movement where the quartet emulated apocalyptic sounds.

In the penultimate “Tangle of rainbows, for the Angel who announces the end of time,” music from the second movement recurred, as did Pozzo and Lucky on the video screen. Pozzo is now blind, subservient to Lucky and in need of help. Vladimir wrestles with aiding him but concludes “What are we doing here . . . waiting for Godot.” The C:N musicians crafted vivid colors and effects here, from the rich, emotive sound of the instruments in unison to steely arpeggios by violinist Berman and passionate trills by all (as Pozzo and Lucky exited).

It was Berman’s moment in the final movement, “Praise to the Immortality of Jesus,” and she rose to it splendidly. The music paints the soul’s ascent to heaven (compare the composer’s “L’Ascension”), an eight-minute exercise that finishes in stratospheric heights on the violin. Berman has the ability to play with the deepest intensity while avoiding any hint of shrillness or diminishing the beauty of her sound, which blended with the beauty of the cathedral itself.

Bloodgood drew the musicians into the play after the music ended by giving them Vladimir and Estragon’s final words after being told that Godot is again not coming, but will come the day after: Vladimir: “Shall we go?” Estragon: “Yes, let’s go,” followed by lights out and no movement at all.

CONCERT:NOVA is a chamber group drawn mostly from the Cincinnati Symphony and Chamber Orchestras. Now in its second season, C:N continues its series of collaborative, multi-media events with “Concert in the Dark” February 2 at the Contemporary Arts Center, a concert that C:N says will “challenge the listener’s experience with live performance by turning off the lights completely.” “Demystifying Arnold Schoenberg” follows in March, “Beyond Ballet, a program of “music in motion” in May (John Adams, Arvo Pärt, Samuel Barber) and “Mirror in the Mirror” in June, featuring live interactive video and works by J.S. Bach, Ollie Mustonen, Michael Fiday and others.

Tuesday, December 16, 2008
Onstage: concert:nova
By Matt Morris
Concert:nova best describes its cross-disciplinary mash-ups of music, theatre and art as “conversations.” For the upcoming Friday night performance, bits of Samuel Beckett’s Waiting for Godot will be performed by Julianna Bloodgood against video work by Trinidad Mac-Auliffe and a revival of Oliver Messaien’s chamber piece Quartet for the End of Time. These works, when at play with one another, contrast situations of finding meaning, especially in adverse circumstances (Messaien created his music while a prisoner during WWII). But, in places, that meaning will no doubt be contradicted by the strains of Absurdism that run through Beckett's work. Best of all, c:n will be performing this work in Christ Church Cathedral (318 E. Fourth St. Downtown), a poignant setting for exploring such issues, including the wait for “Godot” himself. 8 p.m. performance with a 9:30 p.m. reception. $20; $10 students and ETA members.
Posted by Tatiana at 11:57 No comments:

Waiting for the End of Time 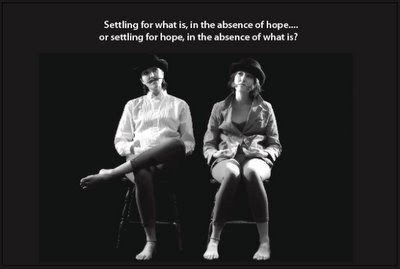 CONCERT:NOVA takes the stage with the moving and provocative world premiere conversation, Waiting for the End of Time. With a video piece by visual artist Trinidad MacAuliffe, C:N will perform Oliver Messaien's poignant chamber work, Quartet for the End of Time, set against abstracts from Samuel Beckett's classicWaiting for Godot, performed by Julianna Bloodgood. This enthralling juxtaposition creates a conversation between two master artists and allows the audience to peek into their lives, ideas and motivations.
The themes of hope, despair, faith and timelessness collide with the political and cultural history of the 20th century in this poignant and deeply collaborative work. Creating a forum for the conversation between two great ideologies, C:N starts with Messaien's pivotal Quartet for the End of Time, composed while a prisoner in a World War Two concentration camp. Messiaen's encounters with a cellist, a clarinetist and violinist and the musicians' evolving friendship inspire an extraordinary work attesting to the eternal freedom of spirit over the temporal captivity of the body. Using abstracts from Beckett's great work Waiting for Godot, the quest for hope and understanding is framed by stunning visuals, music, movement and text.
Featuring visual artist Trinidad Mac-Auliffe and actor Julianna Bloodgood.
C:N musicians: Tatiana Berman (Violin), Ixi Chen (Clarinet), Ted Nelson (Cello) and Julie Spangler (Piano).
Coinciding with the centenary of Messiaen's birth in December 1908, this is a touching and heartfelt message in tune with the spirit of the holiday season.
Preview Performance:
Date/Time: Monday, December 15, 2008
Time: 7 pm performance, 8:30 pm reception
Suggested Admission: $20 at the door/$10 students and ETA members
Venue: CONCERT:NOVA Garden The C:N Garden is located at 532 Reading Road, Cincinnati, OH 45202 in the Metaphor Studios Building. Street parking and parking lots available adjacent to the space. Light beverages and bites available at the reception.

Performance:Date/Time: Friday, December 19, 2008
Time: 8 pm performance, 9:30 pm reception
Admission: $20 at the door/$10 students and ETA members
Venue: Christ Church Cathedral
The Christ Church Cathedral is located at 318 E. Fourth Street, Cincinnati, OH 45202, on the corner of 4th and Sycamore downtown. Parking is available in the 303 Building on the corner of 3rd and Broadway.
______________________________
Founded in 2007 and entering its second season, concert:nova represents a new dynamic force in Cincinnati's musical experience, and is pleased to announce our new project space, the CONCERT:NOVA Garden, sponsored by Urban Sites. Comprised of a diverse core ensemble featuring Cincinnati Symphony Orchestra and Chamber Orchestra musicians, concert:nova seeks to expand the traditional concert experience and provide a unique artistic understanding by building creative and expressive collaborations through the integration of dance, theatre and visual media into each adventurous project, presented in exciting and non-traditional venues. By performing renegade works in renegade spaces, the group is dedicated to producing content that is provocative, compelling and relevant to Cincinnati audiences in today's world.
Please visit www.concertnova.com or contact the C:N team at info@concertnova.com for more info about this innovative ensemble and upcoming events.