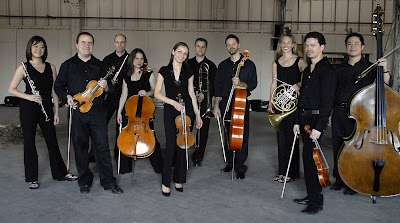 They call it renegade chamber music - a new kind of performance art merging music, dance, acting and visual media in unexpected places. The founders of Concert:Nova, a chamber ensemble of Cincinnati Symphony Orchestra and Cincinnati Chamber Orchestra musicians, say they are tossing traditional classical presentations out the window. The idea, they say, is to close the gap between performers and audience.
"It's no longer about the artist telling the audience about the art. It's taking away the construct of performing and just being able to experience the art," says clarinetist and artistic director Ixi Chen.
Concert:Nova will open its second season on Thursday in the "UnMuseum" at the Contemporary Arts Center, downtown.
The first concert, "Where the Wild Things Are," a takeoff on Maurice Sendak's popular children's book, is emblematic of the group's mission. It's being presented as an "installation" at the CAC, where fantastical illustrations of the tale by Till Lassmann, a German illustrator and animator, will accompany the music that tells the story of Max's journey to the land of the Wild Things.
The musicians will transform into an electro-acoustic ensemble - including Owen Lee on electric bass and Tanya Berman on electric violin - for a fusion of classical, rock and avant-garde by New York composer Randall Woolf.
They hope their collaborative ideas will create a new forum for dialogue about art and break down some of the barriers surrounding classical music.
They have mounted their projects in spaces such as the downtown bar Twist, Below Zero Lounge and Know Theatre in Over-the-Rhine. This year, they hope to branch into alternative venues, such as a parking garage or an airport hangar, "to bring different elements of the city into our art," Chen says.
The five-concert season will include projects with actors, artists and members of Cincinnati Ballet. In December, Concert:Nova will team with artist Trinidad Mac-Auliffe and actor Julianna Bloodgood for a concert of Olivier Messiaen's "Quartet for the End of Time," composed in a World War II concentration camp, paired with Samuel Beckett's "Waiting for Godot."
If you go
What: Concert:Nova: "Where the Wild Things Are"
When: 7 p.m. Thursday
Where: UnMuseum, Contemporary Arts Center, Downtown Cincinnati
Tickets: $20, $10 Enjoy the Arts/Start members or students; 513-321-5073, www.concertnova.com
Halloween revelers: Wear your "Wild Things" costume and stay for a free reception.
http://news.cincinnati.com/article/20081026/ENT03/810260328/1028/ENT
Posted by Tatiana at 18:53 No comments:

Preview of "Where the wild things are"

44: Concert: Nova
Monday, October 20, noon - 2 pm
Sneak Preview of Where the Wild Things Are
Can't wait until October 30? Check out up-and-coming renegade chamber group concert:nova to catch a sneak peek at their upcoming show, Where the Wild Things Are. Inspired by the Sendak story, NYC composer Randall Woolf created an eight-part electro-acoutsic ballet, this time set to projected illustrations by German artist Till Lassmann.
See the complete work October 30, 8:00pm at the CAC.
CONCERT:NOVA is a fresh new chamber music ensemble that blends the traditional, the contemporary and the visual arts to explore a modern kinetic musical experience. Concert:nova strives to explore and perform brilliant works from the chamber music repertoire with a creative visual twist that gives the audience a taste of the unexpected. By illustrating the music and charging the atmosphere with relevant works and performances concert:nova reinvents the stage, reinvents the meaning of "play" and places the audience within the movement of sound as it happens.
Posted by Tatiana at 21:28 No comments: