Ivry Gitlis, Tatiana Berman, Anna-Liisa Bezrodny, Miina Järvi, Mari-Liis Päkk, Triin Ruubel, Mari-Liis Ubio (Violin)It is doubtful that anyone who heard violinist Ivry Gitlis perform Fritz Kreisler’s Liebesleid with the Estonian National Youth Chamber Orchestra August 2 in Pärnu, Estonia will soon forget it.It was a program number and an encore – an encore of an encore – since the audience in Pärnu’s intimate (896-seat) Concert Hall simply would not let him go. The concert, part of the first International Järvi Summer Festival, was titled “Ivry Gitlis and Friends,” and the 88-year-old virtuoso shared the stage with six young violinists (“friends”) in a program that also included Vivaldi’sConcerto for Four Violins in B Minor and Bach’sConcerto for Two Violins in D Minor. The conductor was Paavo Järvi.The event also marked the final concert of the annual Järvi International Conductors Academy with students of the Academy conducting Estonian composer Erkki-Sven Tüür’s 1993 Action.Passion.Illusion for string orchestra and the Suite from Aaron Copland’s Appalachian Springarranged for 13 instruments (1945).
Posted by Tatiana at 12:52 No comments: 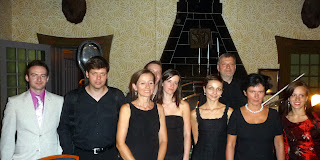 The stuffed eagle, wings outspread, hovering over the foyer of landmark Ammende Villa in Pärnu, Estonia, was witness along with a full house, to chamber music by Estonia’s first family of music, the Järvi’s, July 31. Dubbed “Night Music with Järvi’s,” it was an 11-course feast, with selections by, among others, Astor Piazzolla, Alexander Glazunov, Edward Elgar, Manuel Ponce and Amy Beach. The flavor was robustly Järvi, with virtually the entire program performed by relatives (by blood or marriage) of family patriarch, conductor Neeme Järvi. It was the third of five concerts of chamber music during the International Järvi Summer Festival July 28-August 4 in Pärnu.


It was 21.00 (9 p.m.) and still light in this northern country on the Baltic Sea, now enjoying its summer respite from the darker, colder months of the year. Ammende Villa, a 1905 Art Nouveau gem built by a wealthy German merchant who came to Estonia in the 18th century, is now a luxury hotel with a famed restaurant and gilded age ambiance second to none. The musicians performed at the far end of the foyer, with people seated before, beside and above them for a cozy, intimate experience. Ammende Villa is often the site of such events, musical and otherwise, and this was a choice evening for festival-goers.


One or more of the family of Teet Järvi (nephew of Neeme), his wife Mari and their children, Marius, Miina, Mihkel, Madis and Martin, and flutist Maarika Järvi (daughter of Neeme) took part in every number on the program. Cellist Marius and pianist Mihkel opened with a performance of Schumann’s Adagio and Allegro that was warm and touching (Adagio) as well as bright and animated (Allegro). Marius handled Glazunov’s Spanish Serenade with rhythmic flair, accompanied by Mari on piano. Teet was joined by Mari in Bloch’s somber, earnestPrayer, the pair returning later in the concert for a soulfulAve Maria by Piazzolla.


Violinist Tatiana Berman lit up the concert with a pair of miniatures, Mexican composer Manuel Ponce’s charmingEstrellita (“Little Star”) and Elgar’s perky, spiccato-ladenCapriceuse, in both of which she was accompanied ably by Mari. Pianist Mihkel had an arresting star turn in Finnish composer Einar Englund’s dramatic Introduction and Toccata (1950), as did Marius in his brother Madis’ angular, athletic Moment (2006) for solo cello. Estonian soprano Elizabeth Paavel performed two numbers, Flaps of the Night (2002) by Ester Mägi, grande dame of Estonian music, and the aria “Steal Me, Sweet Thief” from Menotti’s opera The Old Maid and the Thief. In the former, she was accompanied by Mari, with Miina, Madis, Marius and Tatiana Berman joining in the latter.


The grand finale was Amy Beach’s Theme and Variations for Flute and String Quartet. Composed in 1916, it is an impressive work, with six variations on a nostalgic theme (from Beach’s own “Indian Lullaby”), announced by the strings alone. Flutist Maarika Järvi added her lustrous sound to the string texture in the first, cadenza-like variation. Succeeding variations were dance-like (two and three) with spiccato strings and flute in number four and the instruments sharing melodic interest in number five. It ended with a fugue and a return of the opening theme, bringing the gracious evening to a full-voiced close.


Mary Ellyn Hutton
Posted by Tatiana at 12:20 No comments: