Looking forward to performing with some wonderful musicians in the opening performance of the Constella Festival!
Featuring Anthony McGill as well as Randy Bowman and Nina Perlove in new work by Mark Adamo.
It is a very special event because you also get to meet both John Corigliano and Mark Adamo. Reception and an exhibition to follow the concert.
Check out festival's blog: 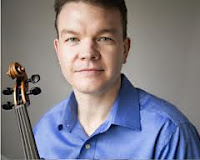 Anthony McGill. Winner of the prestigious Avery Fisher Career Grant. Performer alongside Yo-Yo Ma, Itzhak Perlman, and Gabriela Montero at the inauguration of President Obama. Principal clarinet of the Metropolitan Opera Orchestra since 2004.

The Constella Festival of Music and Fine Arts is proud to present to you Queen City Connections, featuring the esteemed Anthony McGill, clarinet. Regarded as one of classical music’s finest solo, chamber and orchestral musicians, McGill is the former associate principal clarinet of the Cincinnati Symphony Orchestra. He has appeared as soloist with numerous orchestras including the Baltimore Symphony, New Jersey Symphony, San Diego Symphony, and in January 2012 with the MET Orchestra performing the Copland Clarinet Concerto.

“Anthony is one of the finest musicians out there – very accomplished and a mesmerizing performer,” stated our very own founder and artistic director Tatiana Berman. “It’s a great pleasure to have him perform as part of the Constella Festival this year.”

“Constella represents the perfect union of art, dance, music and life,” says McGill. “I look forward to being a part of the exciting energy of the festival.”

Please join us at The University of Cincinnati College-Conservatory of Music’s Robert J. Werner Recital Hall on Sunday, September 30, 2012 at 2 p.m. to experience the inaugural performance of the second season of the Constella Festival. You can purchase tickets by clicking here. Your ticket will also get you into the complimentary reception at DAAP.

To see the full schedule of Constella presented events, as well as events presented by our partners, please visit our website.

Posted by Primavera at 18:48 No comments: